the evolution of voiceover 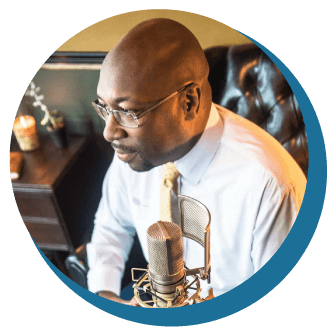 When asked how to describe his voice, George Washington III will tell you that it is rich, deep, powerful, intelligent, flexible, and friendly. As a matter of fact, you’re probably already familiar with his rich baritone. A freelance voice actor, he has represented companies like McDonald’s, Courtyard by Marriott, Nike, Gatorade, Time Warner Cable, Mountain Dew ICE, ROOT Sports Northwest, and Lowe’s Home Improvement. He is the app voice for the National Museum of African American History and Culture.

And he’s just getting started.

A Little Bit of Backstory

George’s career as a male voice actor began in 2003 when he visited a local recording studio to narrate a piece for a First Union National Bank internal video. Being in the studio was enough to spark his imagination and he researched how to make a demo reel, what equipment was needed to become a commercial voice actor at home, and how to refine his unique style. With plenty of practice and both local and national sources, George began to make a name for himself as freelance voice actor.

His versatile background has helped him not only shape his narrative voice for each gig, but also helped him set up a recording studio in his home that rivals some professional recording studios. He has performed with Opera Carolina as a baritone soloist, been an on-camera television host, an educator, and a coach. He holds a Bachelor of Arts in Music degree from Northwestern University.

George utilizes his vast background to provide distinct points of view as a voice over actor. It has allowed him to provide clients with multiple kinds of performances that many not be achieved by other voice over artists.  He approaches each project with the mindset of being “in the moment” of the copy he is about to perform. This gives him a real, believable, and realistic performance. By being able to “see” what his is speaking about, he is able to get into the proper emotional state needed for commercials, narrations, and video game voice work.

While he enjoys performing all type of different voice over styles, he particularly enjoys the “manifesto” style of narration. This style builds in emotional intensity through the life of the performance, ending at a crescendo that connects with his audience. He digs deep to reach the emotions to make this type of voice over narration happen, enjoying the process behind it.

On Voicing A Comic Book Superhero

George had the wonderful opportunity to play DC Comics Green Lantern John Stewart not once, but twice on two different incarnations of the character since he started as a male voice actor. When asked how he approached voicing this iconic character in the DC Universe Online, he says he started by “refreshing my memory on who John Stewart was in the annals of comic books and pop culture, including the fact that he was the first African-American, and only the second Black superhero.” He delved into the characters personality, history and traits as a leader and a marine, and that he enjoys building things, to bring the character to life. “John Stewart is smart, analytical, and passionate, but can still make mistakes. I drew on those details to show the audience who he truly is.”

As a professional African American voice actor, George Washington III is looking for gigs that are fun, diverse and “no niche required.” He would love to work as:

A Little Late with Lily Singh - Lily Interviews the Playstation 5

We went through another company when starting the project that flaked out. George’s great attitude and work ethic literally saved the project. And more than anything else, George allowed me to focus on my job as opposed to spending time following up with a vendor.

George has an incredible voice. But more than that, George takes a genuine interest in the projects he voices. He is responsive to feedback which ensures he delivers exactly what the client needs.

When I send back the finished audio, and the client says, “WOW! That was fast! thank you!!”
I tell them, “You have to surround yourself with great people.” You’re great people. Thank you, Sir

George’s narrative, singing, and acting talents are all impressively versatile, making him a skilled fit for all sorts of creative, commercial, and musical projects. He is always extremely mindful of direction and details, as well as courteous and reliable. It’s always a pleasure to be able to work with him on new scripts.

George is a delight to work with. He’s got a lightning-fast turnaround, but never at the cost of quality. He made sure he understood the tone we needed and delivered exactly what we were looking for. I’d definitely recommend him!

(It) felt like we had an extension of our team in working with Geroge. He really listened to what our needs were and exceeded our expectations every time. George completed all our projects in record time, and he was easy to communicate with. His work is of the highest quality and we will continue to work with George into the future.