Having just completed two audiobooks (more on those adventures to come), I found that the most tedious portion of the process was without doubt the editing of each chapter. During the recording phase, I used the “finger snap” method of marking out my errors; any time I made a mistake, I would snap my fingers near the microphone in order to create a spiked

waveform that I could find more easily while scrolling through the file. As you can see in the screen grab, there are sharp peaks in the wavefrom. As I scroll and scrub through, I see the mistakes, delete the area immediately before it, and smooth out the transition between the sections. Tedious, but necessary work.

After all of this work, I thought I would look into a better way of doing it. My friend Corey Snow, an experienced audiobook narrator, was working on a way to use what is called the “punch and roll ” method with Adobe Audition. Punch and roll is a method that is more easily found in Pro Tools, but doesn’t appear to be a common function in any of the next tier down DAWs that are common in the voiceover world. It allows the user to select where they want to pick up, automatically delete the error, roll back a few seconds so they can hear where they were, and start reading again immediately after that, eliminating the need for post production editing of the type I was doing before.

While researching the issue, I found an article on the indispensable Voice Over Xtra  by Adam Verner outlining how to do this for Adobe Audition using the free AutoHotKey tool for Windows. AutoHotKey is a very powerful scripting tool that can take control of applications, your desktop, anything, and automating tasks. In my first reading of the article, I thought he was speaking of scripting available inside of Audition. Since my weapon of choice is Sony Sound Forge 10, I thought I would inquire with one of the masters of the product, Jeffery P. Fisher. He wrote co-wrote one of my favorite voiceover books, The Voice Artists Guide to Recording at Home and on the Road with Harlan Hogan. I got a simple and succinct answer: “No punch and roll in Forge. You can punch in to a section, you can punch in and continue to roll … but not as you describe.”

That felt like a pretty solid setback, especially since trying to get through the Sound Forge scripting language looked like me trying to program in C: that is, impossible (I spent 20 years in IT, but I couldn’t program my way out of a wet paper bag). Then I realized what Adam had done; he used AutoHotKey to do automation that wasn’t available in Audition itself.

So armed with his Audition script, I started plugging away at a Sound Forge 10 script to make punch and roll possible. During the process, I ran into a few issues that Sound Forge presented with its interface.

Here is the script, complete with documentation. Download and install AutoHotKey first

You can download the undocumented script here. You can place it in any folder on your computer, then double click the file to activate the script when you are running AutoHotKey. 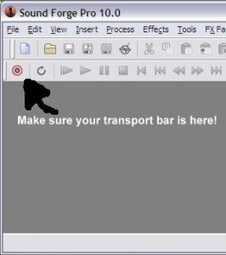 only restriction is that your Transport Bar (where the Record/Play/FF buttons are) is in the top left corner under the main menu bar. This is necessary because I am pressing the buttons here as though a mouse were clicking them, instead of using keystrokes (which causes Sound Forge to open a new file instead of recording in the same file). The script is looking for these buttons in a very specific location relative to the Sound Forge window.

I have only started using it, but it will make a tremendous difference in longform reads and audiobooks. My thanks to Adam for coming up with this great way to use the tools at hand to get what you need!

“It would be really cool if you recorded the first chapter of my book,” my friend Tom said in his easy manner.

I looked at him like he had just invented the snickerdoodle. Brilliant!

Chapter & Voice didn’t start out as a business… it began as a favor.  I wanted to help Tom spark interest for his military science fiction novel. It was (and still is) a ripping good yarn, but he was stuck in marketing and submission hell and didn’t know what else to do.

As an author myself, I knew how hard it was (and still is) to market and sell manuscripts. But… I also knew that as a professional voice talent, I could record and produce an audio sample that would give Tom the attention-grabbing marketing tool he needed to sell his kick-butt, action packed novel.

The recording for his book totally rocked. When I mentioned my little endeavor to other writers, they flipped out.  They wanted me to record samples of their books too!  So- I did. And, here we are.

Here’s what I know now.  Audio, in all its forms, is gaining in popularity and Chapter & Voice is here to help writers use this medium to get published, get known and sell books.

And with that, Chapter & Voice was born. It was a great pleasure and privilege  to be a part of kicking off this project, along with Heather Henderson, Stephen Bowlby, and Jamie Muffett.

To be clear, this is not full audiobook production. We will record about 1,250 words from whatever section of the book the author would like, and send back a clean, polished “AudioTeaser,” which can then be used to promote the book to buyers and publishers. I know from talking with JoJo a number of times about this that she is very excited for Chapter and Voice to see the light of day. She definitely has a vision for this, and really wants to open up this new path for marketing books in an exciting and effective new way.